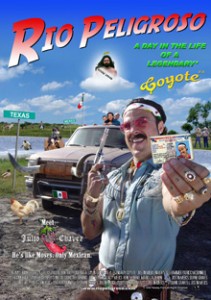 Follows the antics of Julio “The Pepper” Chavez, an honest-to-goodness “coyote” working in a tiny, dilapidated South Texas border town. A self-proclaimed legend, The Pepper prides himself in giving the gift of freedom by ushering immigrants into the United States.

Go on a hilarious journey with one of Texas’ most notorious smugglers, “The Pepper.” A fantastically fun and irreverent comedy that will have you quoting lines for weeks.

“If you don’t laugh out loud at least twice during this flick, there’s something wrong with you. This is some antic, hysterical stuff.” – Kevin Smith, director, Clerks, Chasing Amy

“A goofy, outrageous satire…Meeks gleefully apes it up as Julio, an ego-filled hombre with a penchant for tall tales, personal hygiene, and the occasional senorita.” – Film Threat

“Only in the unfettered world of guerilla filmmaking are films like “Rio” possible. Funny, uninhibited, and gleefully profane.” – Kim Henkel, co-writer, The Texas Chainsaw Massacre