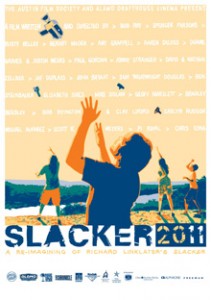 Over twenty-five years ago, Academy Award nominee Richard Linklater’s debut film SLACKER broke new ground, bringing experiments with character and narrative into the mainstream and gaining a cult following in the process. Now it has been remade by a series of teams commissioned by the Austin Film Society.

Although the new scenes mirror those that went before, the dialogue has been updated and characters and settings subtly altered to represent the concerns of a new age.

“An interesting new take on the original scene.” – Slackerwood